Tool life is one of the main cost factors in high pressure die casting. The Italian foundry Mazzucconi used the capabilities of virtual Design of Experiments in MAGMASOFT® to substantially increase the die life for a steering housing.

Unfortunately, the die of a cast part that had been produced for a long time fell short of the expected tool life. Changes to the casting geometry were not an option due to the existing design freeze. Therefore, the aim of the project was to identify the main influencing factors on tool life in the process and adjust the casting process accordingly. One of the major influencing factors on tool life are thermo-mechanical stresses in the die surface and the associated die erosion. These stresses are caused by temperature changes during the casting cycle. Mazzucconi decided to investigate the following parameters:

For each of the five parameters, a separate systematic set-up using the in-build Design of Experiment was done. The foundry used MAGMASOFT® and MAGMAdielife to estimate the die life for their process. To minimize the simulation effort, a substitute geometry was used that had characteristics similar to the original casting, see Figure 1.

First, the status quo of the existing process was simulated and then compared to the real damage in the die. Figure 2 shows the tool cracks already visible on the casting and the result of the lifetime estimation. 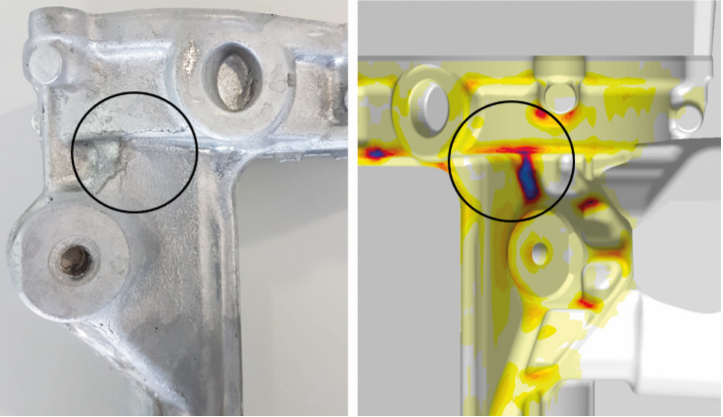 For the DoE used to analyze the distance between temperature control channel and die surface, in addition to the initial situation, three variations with the distances 3d, 5d and 7d were defined. In addition, a variant with deactivated die temperature control was simulated.
The results reveal that the tool life decreases with increasing distance between cooling channel and die surface, see Figure 3. 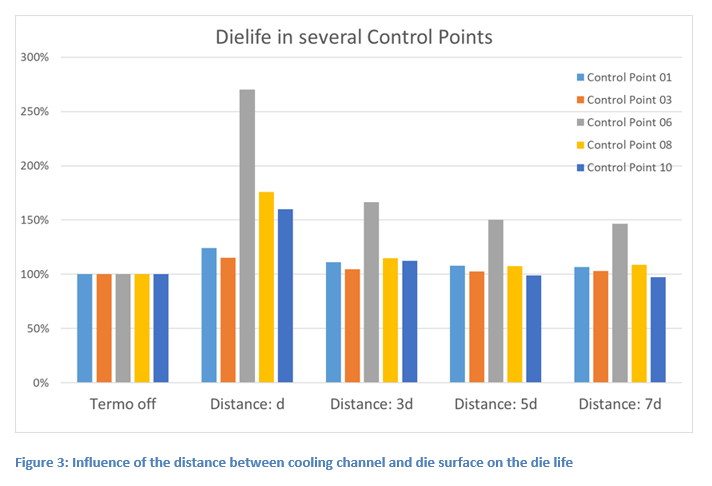 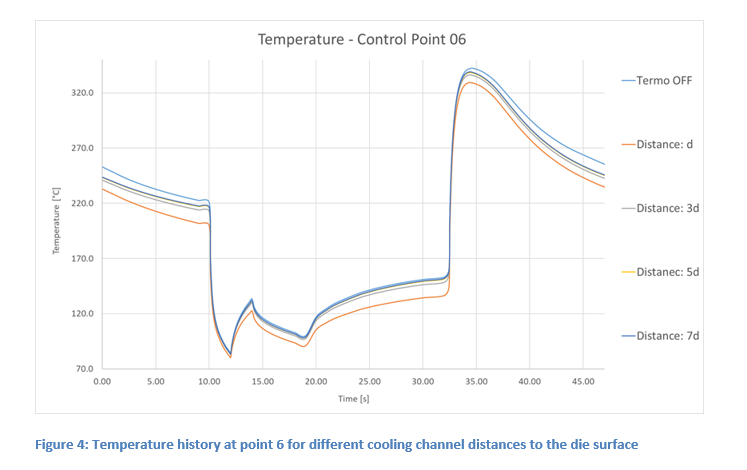 For the other process variables, corresponding virtual Designs of Experiments were conducted, too. These led to the following fundamental insights:
In the area analyzed, the diameter of the cooling channels has no influence on the tool life. Explanation: The average die temperature does not change, resulting in the maximum stresses both during spraying and during filling/solidification not changing either.

The temperature of the cooling medium has a considerable influence on the tool life. This effect can be explained by the fact that the die is on average colder with colder cooling agents. This, in turn, leads to a reduced thermal shock during spraying and, thus, to lower tensile stresses. The temperature increase of the die surface during filling/solidification, however, remains approximately the same, which means that the level of compressive stresses is also almost identical. Overall, the stress range decreases with lower cooling agent temperature (see Figure 5).

The variation of spraying, in turn has shown that intermittent spraying of smaller amounts causes smaller tensile stresses in the die surface than one single, intense spray stroke. 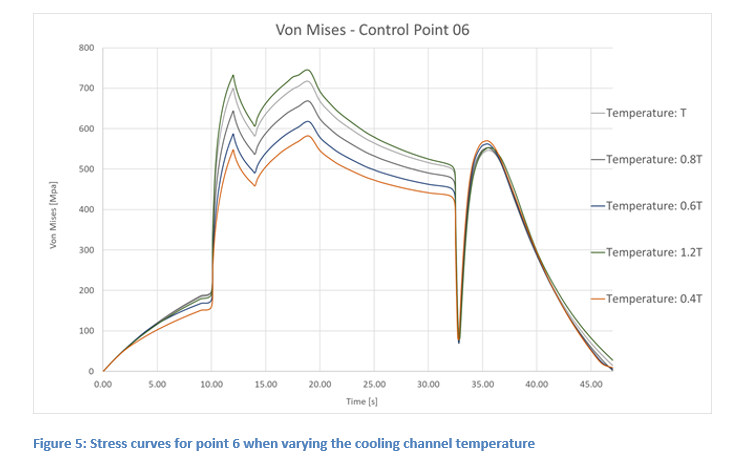 The different investigations show that the layout of the spraying process has the greatest influence on the die lifetime. The aim must therefore be to keep the thermal shock during spraying as small as possible. On this basis, new process parameters were defined for the series part:
Wherever possible, cooling channels are placed closer to the surface to thus minimize the surface temperature before spraying.

In the simulation with MAGMASOFT®, the verification of the new process conditions revealed a considerably higher die lifetime (see Figure 6). This was confirmed in the series production with new tools. 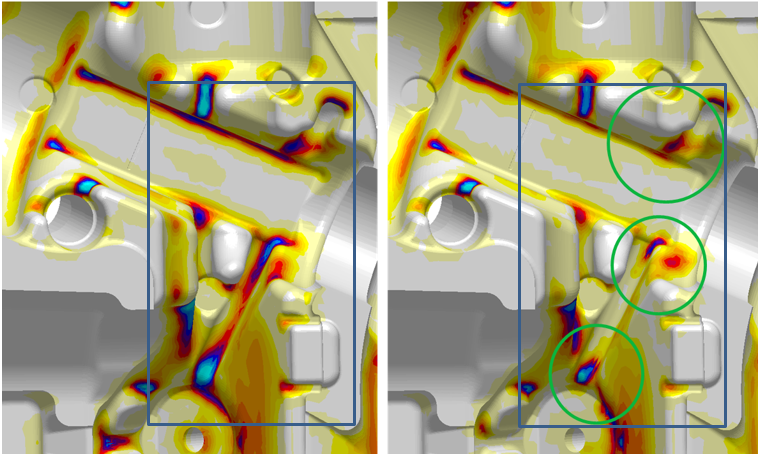 Fonderie Mario Mazzucconi S.p.A. produces aluminum alloy components, casted in gravity, low-pressure or high-pressure die casting, as well as fully machined and assembled components. For over more than a century, Mazzucconi has been active in the field of metal castings and machining. Mazzucconi is located in Ponte San Pietro (Bergamo) and has seven production facilities located in Italy plus a local office in Munich, Germany.