Using the stress simulation technology of today, it is possible to design gating systems resulting in a minimal warping tendency. The two different layouts shown here both will lead to a proper filling of the casting, but very different stress distributions will result. In the layout with two gates, the residual stresses extend from the gate into the casting before trimming. After the gate is removed, these stresses are relieved and distortion results.

In the second case, the residual stresses are much more confined to the gating and a lowered tendency to warpage after trimming is the result. 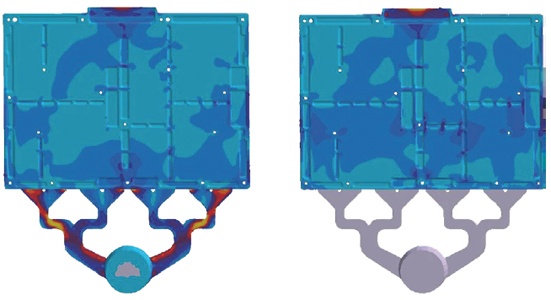 Stresses are moved into the gating system in the new layout (left). Redistribution of stresses after trimming the gating lead to less distortion (right)