A throttle body produced on a dual-cavity die showed large porosities in a boss but “only“ in half of the castings. The size and color of the defects led to the conclusion that this was caused by die lube trapped on the bottom of the boss of one of the two cavities. 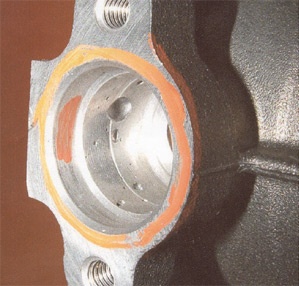 MAGMASOFT® was used to simulate the entire casting process, which revealed that if die lube were trapped in the boss, the filling orientation would lead to different filling patterns. In one part, trapped die lube is washed out early in the filling process. In the other part, the die lube stays there until the end of the filling, when it evaporates and creates steam bubbles. These bubbles are trapped inside the casting boss. Tracer particles were used to show the movement of the die lube particles when they are washed out by the melt, as well as the melt flow itself.

Several recommendations were made including the training of operators to assure no die lube is left in the die, design changes like adding more chamfer to the base of the boss to allow die lube to drain, as well as changing the pouring orientation of the parts to avoid the problem all together. 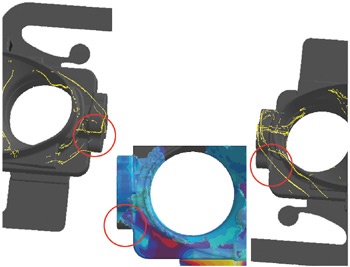