Weldable Quality with the First Shot!

In the development of new cast components, the aim is always to avoid having to make changes to the casting layout and tooling, and to realize a stable process from the start of production. Structural components that are welded in the assembly process need to meet high requirements. Besides porosity, entrapped air is usually the biggest problem for casting sections that are welded, because the entrapped gas will expand upon reheating.

NingBo HuiWang Casting Mould was asked to design a die for a complex die cast crossbeam. To guarantee the part quality and to shorten the sampling phase, MAGMASOFT® autonomous engineering was used and the MAGMA APPROACH was applied consequently. The ADC12 crossbeam has a characteristic wall thickness of 4.3 mm, weighs 4.45 kg, with total dimensions of 416 x 182 x 22 mm. In addition to minimizing the porosity level, a smooth filling pattern with a minimal entrapment of air had to be ensured. Based on these two requirements, four gating layouts were developed (Figure 1). 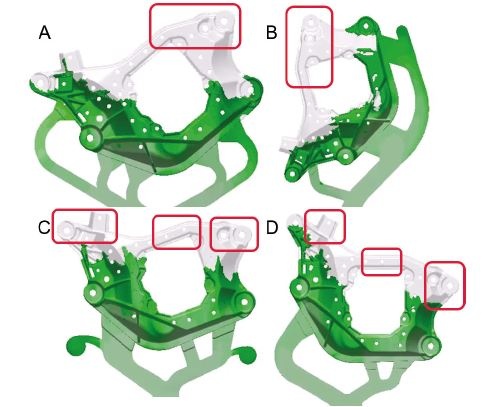 Figure 1: Four gating designs (A to D) and corresponding filling results at 75 % filled (the regions filled last are marked by red boxes)

One layout is based on five smaller gates (A). The other three layouts rely on one large gate to feed the most severe hot spots and two additional smaller gates (B, C, and D).

All four gating layouts were tested in a virtual Design of Experiments (DoE) using MAGMASOFT® and evaluated based on the optimization objective “Smooth Filling”. This objective evaluates and minimizes the total melt surface area generated during the entire filling process to ensure a minimum of entrapped air. Gating layout A showed the best result, having the lowest amount of generated melt surface during filling with about 10 % less area than the worst gating concept B (see Figure 2). 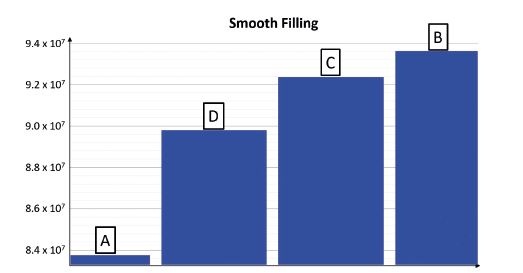 A large gate ensures a prolonged feeding to the critical areas. Nevertheless, this method can also induce stresses and increased deformation of the part. In addition, it might be critical for the expected die life due to significantly increased local temperature differences. Gating layout A also avoids these quality risks and ensures the best filling, thus it was picked as the most promising concept.

Following the filling result of concept A, a first iteration of positioning the overflows was carried out. As shown in Figure 3, the concept displays high air pressure indications and seems not able to meet the high requirements for weldability.

Figure 3: Air pressure result for the original overflow layout (left) and with additional venting near the critical area (right)

A second iteration solved this problem by providing additional venting in the critical (marked) region of the casting.

In the final step, the process parameters and especially the shot curve characteristics for the selected gating layout needed to be determined. In another virtual DoE, MAGMASOFT® was used to determine a second phase velocity that guarantees the lowest possible gate velocities to reduce air entrapment and increase material integrity, while making sure that the melt temperature does not drop below a critical value to avoid misruns. The only variable investigated was the second phase velocity, which was varied between 3.5 and 4 m/s in 0.1 m/s steps.

The virtual DoE confirmed that even the lowest evaluated second phase velocity is sufficient to prevent misruns due to low melt temperatures. The first test production was conducted on a vacuum-assisted 1600 ton high pressure die casting machine. It was directly possible to produce high integrity castings, as was confirmed by x-ray inspection. Subsequent welding tests proved the low gas content of the casting as predicted by MAGMASOFT®, and made it possible to start series production after just one sampling run. The comprehensive and rigorous use of MAGMASOFT® and the MAGMA APPROACH shortened the development and validation process of the high integrity crossbeam significantly. The necessary simulation effort was minimized by a systematic development methodology. Efficient simulations revealed solutions tailored to the relevant question of each specific development stage. This way, the whole product development process was shortened, and substantial costs due to tooling modifications as well as multiple sampling runs were avoided.

NingBo HuiWang Casting Mould Industrial Co., Ltd., founded in 1992, is a member of the Chinese Excellent Die Casting Mould Enterprises and manufactures dies for countless international customers in the automobile and electronics industries. Since 2013, HuiWang Mould uses MAGMASOFT® to improve the quality, reliability, and robustness of its mold products.