Producing Large Castings Without Distortion – Is This Even Possible?

The answer is “yes.” MAGMASOFT® accurately predicts the distortion of large structural castings – here, using the example of a sillboard side connector. This part is located in the rear end structure of the VW Touareg and the Porsche Cayenne.

The original problem for the German automotive group Volkswagen was, above all, the endless number of tool correction loops during production: a long way to go until the casting corresponded to the drawing specifications. To ensure dimensional accuracy, a pre-correction of the expected component distortion can be considered in MAGMASOFT®. “Pre-correction” means that the part geometry is incorporated in a deformed way into the die cavity so that the produced “distorted” part deliberately “warps” into the nominal geometry. This significantly reduces the cost of straightening operations and the number of any scrap parts that cannot be straightened. At the same time, the number of tool corrections after the first pouring is significantly lower – thus, resources are conserved and the effort is substantially minimized.

Until now, the data for the pre-correction of the cast part distortion in the die was based on experience or measurement results from previous casting trials or series where a die already had to be available.

With the possibilities of casting process simulation, this information can be determined at an early stage without having already manufactured a die. 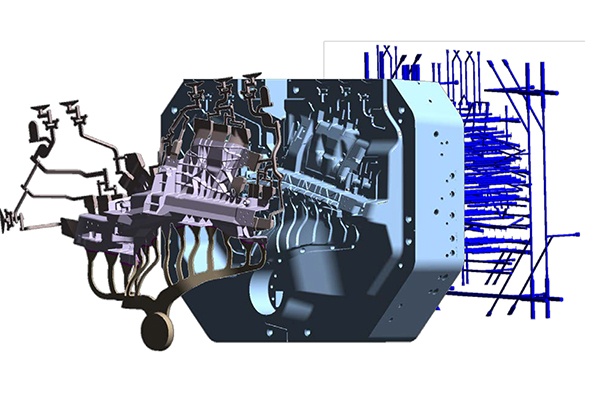 In the following case study, an aluminum structural component from VW (Fig. 1) is used to show how the pre-correction of distortion in the die-casting tool was considered with MAGMASOFT®.

The rigging system for thin-walled structural components was laid out for a natural ductile aluminum alloy. A natural ductile cast alloy has the advantage that an expensive heat treatment process that promotes additional distortion and often calls for a subsequent straightening procedure is not required.

Important for reliably predicting the casting distortion is the most realistic representation possible of die filling and solidification. For this purpose, in addition to the detailed layout of the die inserts, the entire thermal regulation of the die was considered in the simulation model as well as several heating cycles with real process times. The casting distortion was then calculated within the die, before and after ejection of the part, after quenching, and after trimming of the gating system and overflows. The distortion result obtained from simulation was used as a base geometry for the pre-correction of distortion in the die. In line with the experience of the process experts, the result was exported from the casting process simulation with a factor of -0.75 (-1 means 100 % pre-correction, -0.75, consequently, corresponds to 75 %). The distorted geometry was then scaled back to cavity size. The adapted distortion result was exported as a CAD model to be used as design pattern in the tool shop. The virtually determined deviation dimensions in the mold required a redesign of the die (casting, runner and overflow, and die inserts). Subsequently, to check the dimensions for pre-correction, a complete process simulation with the modified die geometry (including the pre-corrected distortion) was carried out. To evaluate the process stability, VW used MAGMASOFT® to analyze the influence of critical process parameters, such as cooling temperatures and die opening time, on the distortion behavior of the sillboard side connector.

In the final simulation, the “virtually” corrected tool resulted in most areas of the casting being within the allowable tolerances. After optically measuring the die to rule out errors, VW cast the first raw parts and then compared the real geometrical deviations with the virtually predicted distortion.

The optical measurement of the manufactured part was then compared with the distortion result of the simulation.

At the same time, selected process parameters of the real, existing casting process were analyzed for their robustness. Here, the influence of different die opening times and the thermal regulation of the die on the part distortion should be considered. 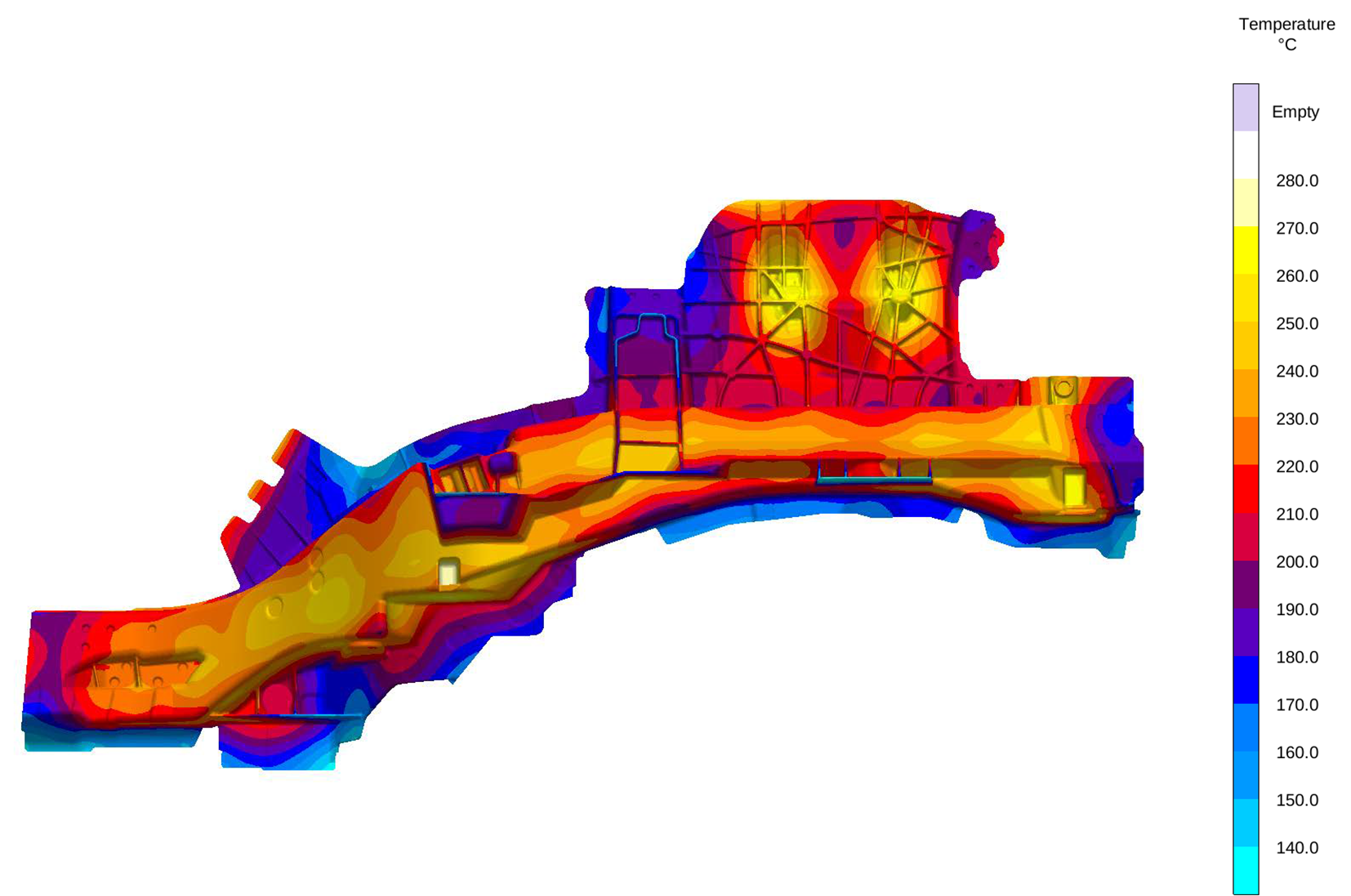 Figure 2: Temperature distribution at the time of ejection from the die

Figure 2 shows the temperature distribution at the time the casting is ejected from the die. The distortion of a structural component during the casting process is composed of the “spring-back” during ejection of the part (stored elastic stresses are released when the component is removed from the die) and the subsequent (free) distortion caused by cooling to ambient temperature. Local areas with higher temperatures have a stronger effect than colder areas during cooling, ultimately causing the thermal distortion.

Figure 3: Distortion evaluation after casting without consideration of pre-correction in the Measurement Perspective of MAGMASOFT®. In the center area, there is a deviation of approx. -0.6 mm; the maximum deviation from the nominal geometry is approx. +2.3 mm at the left end of the side connector.

Figure 3 shows the measurement of the virtual distortion result without considering the pre-corrected distortion in MAGMASOFT®. The maximum deviation from the nominal geometry is approx. +2.3 mm at the left end of the side connector. Measurements are performed using a so-called RPS positioning. The task of the reference point system (RPS) is the unambiguous positioning of the component in free space. 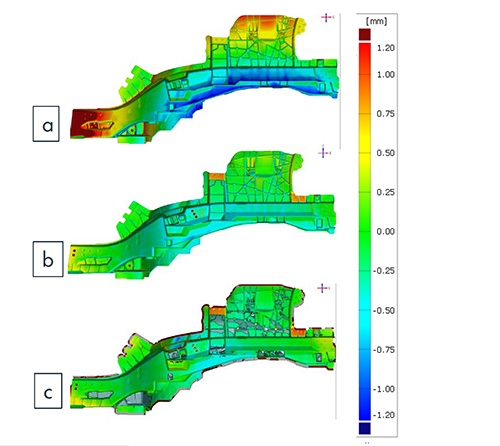 Fig. 4a shows the predicted distortion result from the simulation without pre-correction in the measurement software. The import of the simulated, distorted component into the virtual measurement tool used by VW enables the creation of a virtual measurement report, similar to the quality inspection of real components during series production. In this way, the calculated component distortion can be analyzed in any required detail and according to specification. Corresponding to the evaluation from the Measurement Perspective in MAGMASOFT® (Fig. 3), here, too, the maximum deviation from the nominal geometry is at the left end of the side connector (RPS positioning).

Figure 4b depicts the distortion result from the simulation with the pre-corrected die geometry, also in the RPS positioning. It shows a significant reduction in casting distortion. Nearly all critical areas are within the specified tolerances for joining and functional surfaces of +/- 0.7 mm.

Figure 4c illustrates the real measurements of a cast sillboard side connector with the same parameters used for the distortion prediction with MAGMASOFT®. The part is dimensionally completely within the specified tolerances and corresponds both qualitatively and quantitatively to the geometry predicted by the simulation.

The distortion predictions for the sillboard side connector from the casting process simulation with MAGMASOFT® have shown good agreement with the measurement results on the actual cast part with pre-corrected geometry. The tooling modified based on the simulation resulted in most casting areas being in tolerance without the need for additional tool correction loops after the first trial. Before working with MAGMA, the precorrection in the die had to be determined by means of several casting trials.

The old method was expensive, cumbersome and sometimes led in the wrong direction. For VW, the new path is now no longer a one-way route: Large castings can be produced without long delays – and, above all, without distortion.